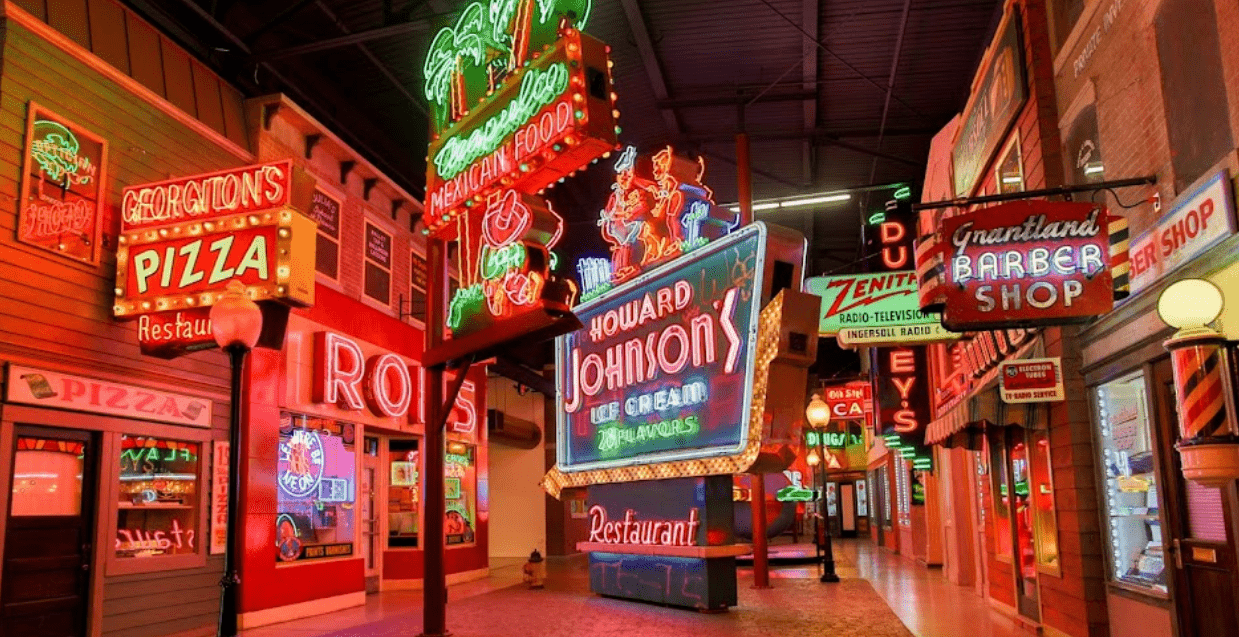 Cincinnati is an amazing city filled with a diverse array of attractions that are sure to please any visitor. Whether you’re looking for something educational or just want somewhere fun to take the kids, Cincinnati has it all! In this blog post, we’ll show you five of our favorite hidden gems in The Queen City and why they’re worth your time.

This is not your typical museum. But if you enjoy history, then The American Sign Museum is a great place to visit. This museum provides a glimpse into how advertising has evolved over the years with vintage neon signs and other historic signage from all around America.

Plenty of activities are available for visitors as well including guided tours that take guests on an exploration of Cincinnati’s own sign district.

Plan to spend at least two hours here and you’ll have a new appreciation for how commerce has evolved over the years.

Cincinnati owes its growth in the late 1800s to transportation, which included street railways that proved too expensive for developers of all income levels. So instead, they turned what was once an abandoned canal into a subway.

With three miles of track and two stops, the Cincinnati Subway was an important part of transporting goods in Cincinnati for over 100 years after it opened to service. The line has been closed since 1951 but is now open for tours by special request only that allow guests to experience its eerie beauty firsthand.

The Rookwood Ice Cream Parlor is an ice cream shop, bakery, and restaurant that offers a wide variety of delightful treats. But delicious treats aren’t the only thing this place has to offer. It’s housed in a building with over 100 years of fascinating history. This space has been a tea room in the thirties and a USO headquarters during the second world war before it became a cafe.

The interior is covered in vintage ceramic tiles from Rookwood, the same tiling company that worked on New York’s subway stations. It’s said that Japanese pottery was the inspiration for some of Rookwood’s early designs.

This one is for the kids. If you’re looking to entertain your little ones or just have a good time, this attraction will do it all! The Mushroom House was designed by architect, Terry Brown. And it took a lot of mathematical calculations and careful drawings to make this structure a reality. Construction started in 1992 and it finally opened in 2006.

This whimsical treehouse has been standing proudly ever since. It has a storybook-like appearance. Kids love this place and it’s not hard to see why.

Visit the Most Unique Spots in Cincinnati, OH

Cinc is a city full of hidden gems that will leave you feeling like you’ve been taken on an adventure. From the American Sign Museum to The Rookwood Ice Cream Parlor, these unique spots are perfect for both locals and visitors alike. These five places are sure to give your trip a little something extra special when visiting Cincinnati Ohio!

Looking for a place where you and your family can enjoy a nice bike ride? Check out our next post with our favorite bike paths in Cincinnati.

Need to Spruce Up Your Deck?

Call us to get a FREE quote on deck staining in Cincinnati, OH. We look forward to making your deck look as good as new again!